Crime of the Week

If you have any information about these crimes or any person(s) involved, you are urged to submit a tip via this website, call our TIPS line at 217-373-TIPS, or use our free P3 Tips mobile app.  Crime Stoppers doesn't want your name, just your information.  Crime Stoppers will pay a cash reward of up to $1,000 for information that leads to an arrest and you will always remain 100% anonymous.

Disclaimer: The information on this page was provided to Champaign County Crime Stoppers by local law enforcement. The information was valid at the time it was posted but may be subject to change without notice.

On Tuesday, June 1st, 2021 at approximately 5:00 A.M., Officers were dispatched to Shooters Bar and Grill, located at 215 S. Tanner St. Rantoul Illinois, for a report of an open door on the business. When officers arrived, they located damaged gaming machines, consistent with someone breaking into the machines. The offender was able to remove an unknown amount of US Currency from the machines before leaving the business.
The suspect is observed wearing dark colored pants, dark hoodie, facemask, gloves, and white tennis shoes. The image below was taken from security cameras from within the business. 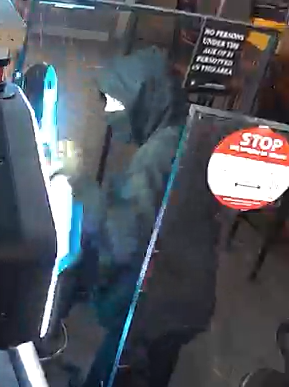 On Wednesday, May 5, 2021 at approximately 12:11 p.m., the victim was sitting in his vehicle in front of One Stop Food and Liquor, located at 701 North Neil Street, in Champaign when he was approached by the suspect. The suspect pointed a handgun at the victim and attempted to pull the trigger, however the gun failed to discharge. The suspect tried manipulating the firearm before running from the scene.
The suspect was described as a black male wearing a black hoodie with white stripes, red shirt, black sweatpants, and a shirt wrapped around his face. Investigators are seeking the public’s assistance with identifying the subject who was captured on video. 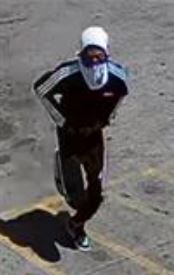 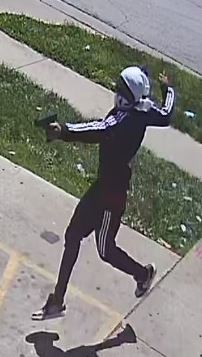 Aggravated Robbery in the City of Champaign
May 17, 2021

On Sunday, May 2, 2021 at approximately 3:00 p.m., police officers responded to Kaufman Lake, located at 2702 West Springfield Avenue, in Champaign for the report of a robbery. Upon arrival, officers learned the victim was walking around Kaufman Lake when she was approached by the suspect. The suspect held the
victim at knife point and demanded her cell phone. The suspect fled on foot with the victim’s phone.
The suspect was described as a black male, approximately 20-25 years of age, with a tattoo on his lower left leg. He was last seen wearing a gray hooded sweatshirt, dark shorts, and a blue surgical mask. A composite photo of the suspect is attached. 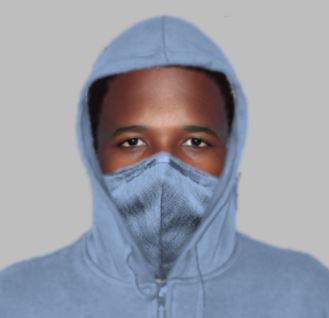 On Monday, April 26, 2021 at 4:34 PM, a traffic accident occurred at 900E County Road 250N in Pesotum, that sent one person operating a motorcycle to the hospital with non-life-threatening injuries. The Champaign County Sheriff’s Investigators are seeking the public’s assistance in identifying a blue truck that might have contributed to the cause of the accident.

On the afternoon of April 11, 2021, Urbana Police Officers responded to the 1100 block of South Webber Street for reports of shots fired. Upon their arrival, they found a 46-year-old male victim with a gunshot wound. The victim was transported to a local hospital where he succumbed to his injuries. Witnesses observed a silver sedan near the scene at the time of the shooting and it is believed to be involved.

On Saturday, April 10, 2021 at approximately 6:08 p.m., a female entered the Hobby Lobby, located at 2102 North Neil Street in Champaign, and fraudulently purchased merchandise with a stolen credit card. A male subject, who accompanied the female, pushed the merchandise out of the store.
The offenders were described as a white female, with long blonde hair wearing a pink shirt, tan jacket, blue jeans, carrying a red and black plaid bag. The other subject was described as a white male, wearing a dark long sleeve shirt, black shorts, a black hat and had a scar underneath his right eye. 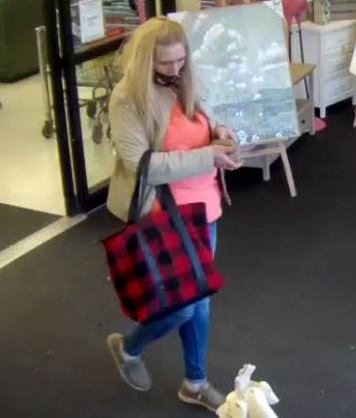 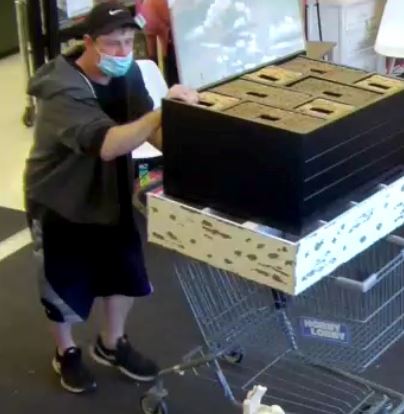 On Tuesday, March 30, 2021 at approximately 9:20 a.m., two males entered the Target store, located at 603 East Green Street in Champaign, and stole Apple merchandise. An employee unlocked the display case to show the males a phone. The males stole several items from the display case and fled the store. On the way out, a customer confronted the suspects causing them to drop some of the items. The suspects fled with over $1,000 in merchandise.
The offenders were described as two black males, one 5’8” and approximately 200 lbs. He was last seen wearing a gray hat and blue shirt. The second male was approximately 5’11” and 160 lbs., wearing a blue Nirvana hooded sweatshirt and blue jeans. The offenders left in a larger black SUV with Pennsylvania license plates which was later determined to be stolen. 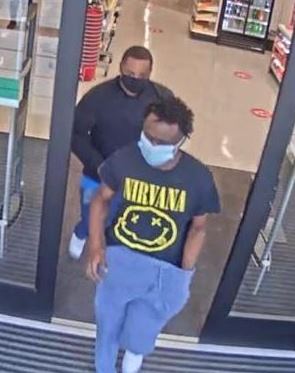 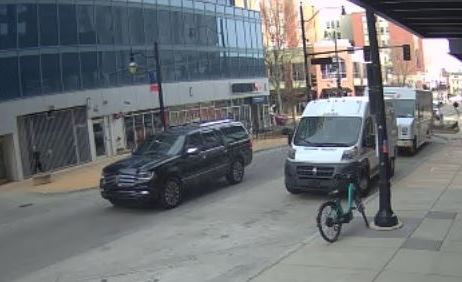 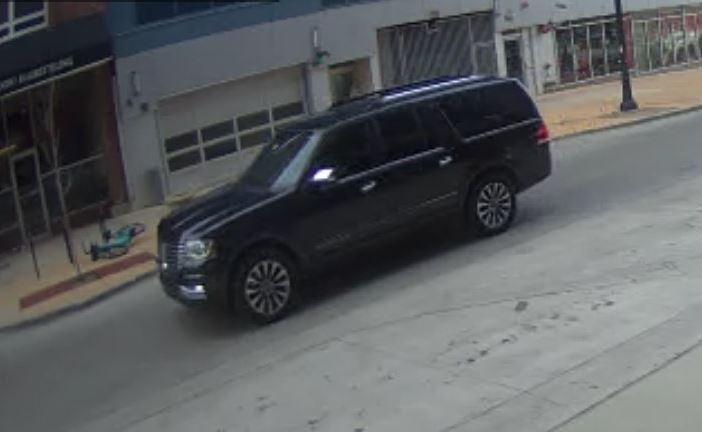 This week Champaign County Crime Stoppers is seeking assistance from the public regarding theft and criminal damage to property.
On March 3, 2021, between the hours of 3 and 5 p.m., an unidentified male entered the apartment building, located at 507 South Second St, in Champaign for an unlawful purpose. While inside the apartment building, the male attempted to steal a moped, causing significant damage to it in the process. The male then utilized a red wagon to aid him in stealing several packages from the lobby.  The offender is described as a white male, medium build, last seen wearing an orange hoodie, dark colored shorts, and white Adidas sneakers. The offender has multiple tattoos on the lower half of both legs. 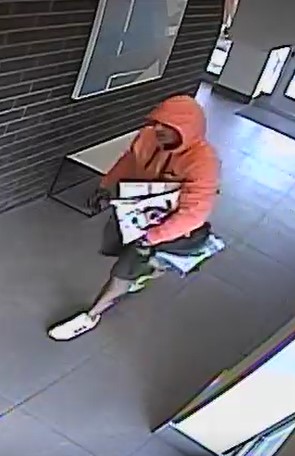 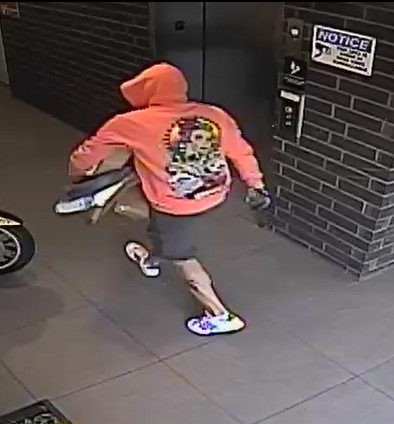 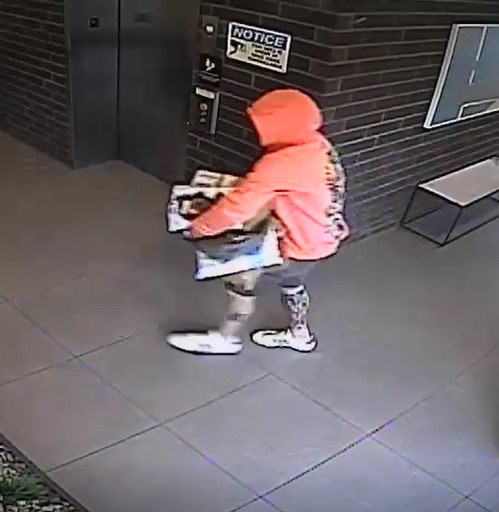 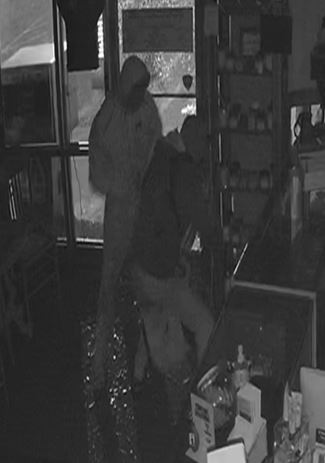 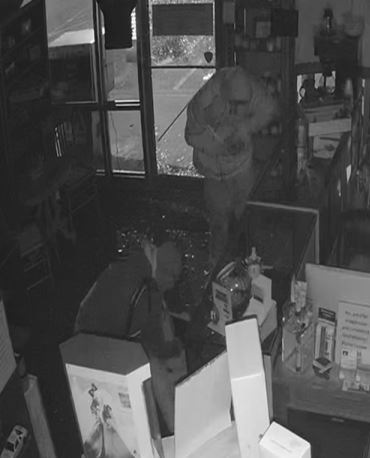 On the evening of Sunday, March 14th, 2021, police responded to two peeping tom / exposure incidents in Urbana. One incident occurred around 8:10 p.m. in the 500 block of West Main Street and the second around 9:45 p.m. in the 700 block of West Oregon Street. In the early morning hours of Monday, March 15th, 2021, police responded to a third incident which occurred around 2:00 a.m. in the 300 block of South Busey Avenue. The suspect was described as a tall black male possibly in his 20’s.
Police are seeking information on any similar incidents and asking anyone in the involved neighborhoods with surveillance cameras to review footage for any suspicious person captured in the area around the time of the incidents.

On February 5, 2021, between 11:00 a.m. and 12:30 p.m., an unknown male stole a wallet from a shopping cart at Meijer on North Prospect Avenue in Champaign. Officers responded and learned one of the victim’s credit cards was used at the Champaign Target shortly after the theft. The credit card was used to purchase gift cards and other merchandise totaling over $1,700.00.
Surveillance video captured the suspect at Target, who appeared to be a white male, 5’10” weighing approximately 250 pounds. He was last seen wearing a blue/gray stocking cap, tie dye mask, brown coat, blue shirt, and jeans. 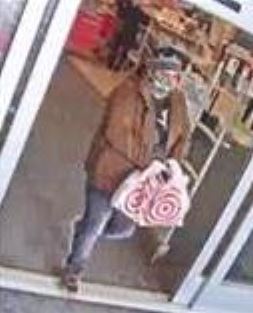 On Saturday, February 6, 2021 at approximately 2:38 p.m., police officers responded to the 1300-block of West Church Street in Champaign for a theft. An elderly couple met the suspect, who had agreed to purchase their iPhone 11 via Facebook. The suspect asked to look at the phone prior to making payment then fled the scene with the phone. The phone was valued at over $500.00.
The offender was captured on surveillance video. He appears to be a black male with short dreads, approximately 5’10” tall, 150 pounds, and was last seen wearing a navy blue Under Armour jacket and jeans. 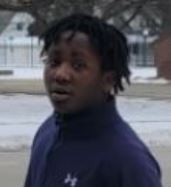 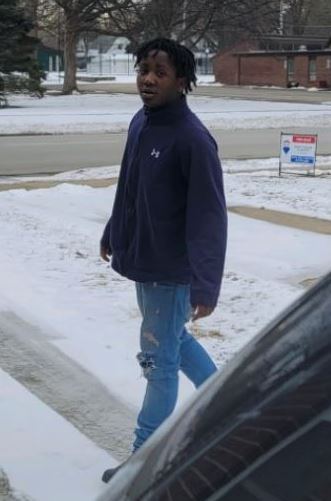 On Tuesday, January 26, 2021 at approximately 4:05 p.m., police officers responded to Verizon, 2116 South Neil Street in Champaign, for a theft.
A male entered the Verizon store and stole a blue Apple iPhone 12 Pro Max from the display counter while the employee was distracted. The offender ran out of the store and fled the scene in a black Chevrolet Malibu with an unknown Illinois license plate.
The offender was captured on surveillance video. He appears to be a black male, in his twenties, approximately 5’06” tall, skinny build, last seen wearing a black face mask, blue hoody, black printed lounge pants and black slides. 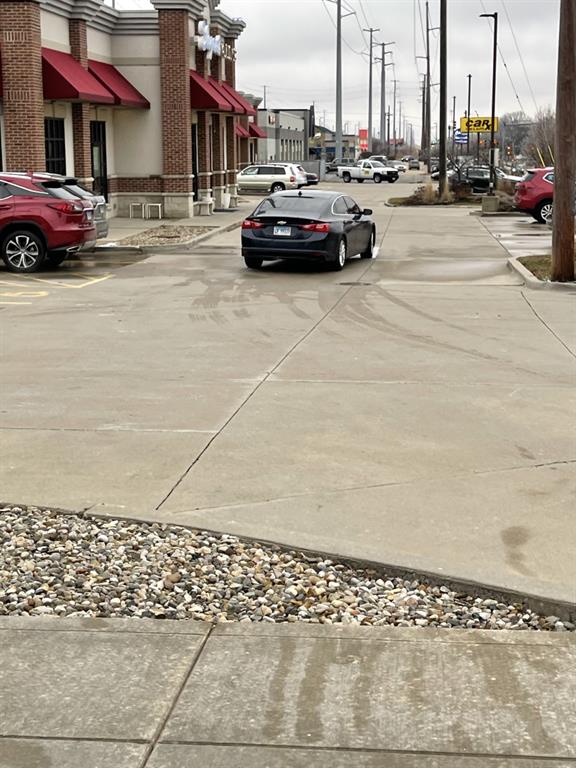 On Monday, January 18th, 2021 at approximately 08:36 a.m., police officers responded to The Upper Bout, 723 South Neil Street in Champaign, for a burglary.
A subject was captured on video breaking the main entrance door to the building to gain access. While in the building the subject damaged property and stole an item of clothing. The business sustained approximately $1500 in damages.
The suspect was last seen wearing black pants, white tennis shoes, a camouflage jacket with the hood up and a white mask.

On August 29, 2020, at approximately 1:36 p.m., police officers were dispatched to a theft at Meijer, 2401 North Prospect Avenue in Champaign. Officers learned a female’s wallet was stolen and her credit card was used at two other stores in the North Prospect Avenue area. While at Sam’s Club suspects charged $2,064.80 in merchandise and at Walmart, they attempted to charge almost $1,000.00 but were unsuccessful.
Surveillance video captured the three suspects who appeared to be an older black female with curly hair, a younger black female with longer braids and a lighter dyed area on top, and an older black male. 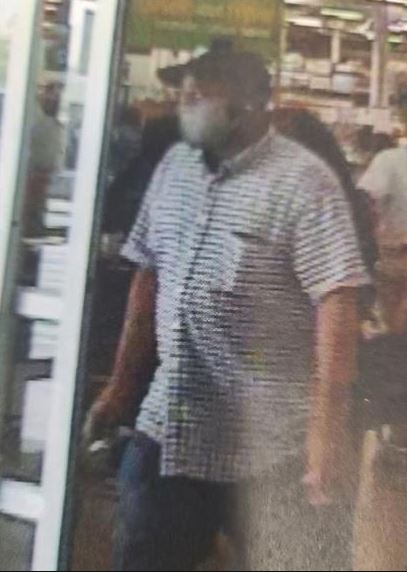 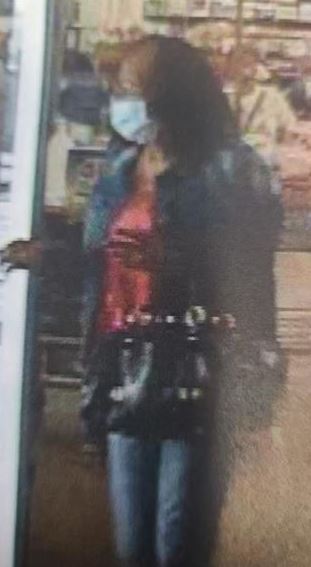 On December 28, 2020, at approximately 4:46 a.m., Champaign Police responded to the 2000 block of Moreland Boulevard for a reported shooting. Upon arrival, officers discovered an unresponsive 36-year-old female victim inside of a vehicle suffering from multiple life-threatening gunshot wounds. The victim was transported to a local hospital where she succumbed to her injuries.
Investigators are actively investigating all leads and seeking any information in relation to this case. Police are asking anyone in the involved neighborhood with surveillance cameras to review the footage for any suspicious persons or vehicles captured in the area either prior to or after the incident.

On Sunday, December 20th, 2020 at approximately 2:35 a.m., Deputies responded to Main Street in the Village of Penfield for reports of multiple fires. Deputies learned unknown subject(s) started three separate fires.
One of the fires was set in a residential garage and fully engulfed the structure, which contained the resident’s vehicle, snow blower, kayaks, and other tools. The second fire was in a trash bin behind a community building, owned by a local church. The third fire was in a trash barrel inside of the U.S. Post Office, causing minor damage to the inside of the building.

Between Saturday, December 19, 2020, at 1:30 p.m. and Monday, December 21, 2020 at 6:00 a.m., a subject forced entry into a construction site located at 309 East Springfield Avenue in Champaign. Upon entry, the subject stole numerous construction tools valued at over $2,500.00.
The suspect was captured on surveillance cameras and appeared to be a white male wearing a gray, white, and red hooded jacket with Cali on the front, blue jeans, and black shoes. He was also wearing glasses and appeared to have a tattoo on the right side of his neck. 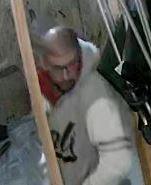 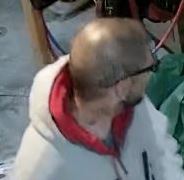 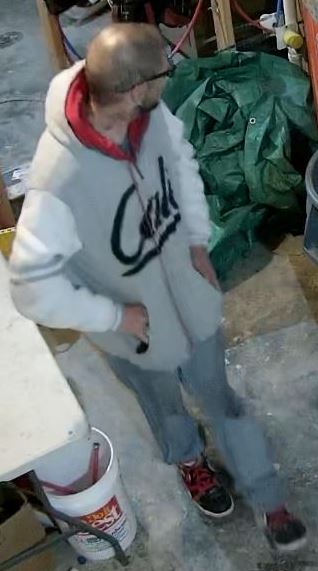 Between Friday, December 4, 2020, at 8:00 p.m. and Saturday, December 5, 2020, at 1:00 a.m., unknown person(s) forced entry into the leasing office for EEG Management, located at 1806 West William Street in Champaign. Upon entry, a company credit card, keys, packages, and numerous pieces of computer equipment were stolen. The credit card was later used at a Circle K gas station and at Piccadilly Liquors.
Surveillance video of the incident was obtained from the gas station. The suspect appears to be a black male wearing a black hooded jacket, light-colored face mask and black/white shoes. 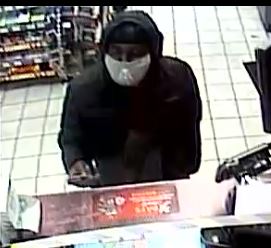 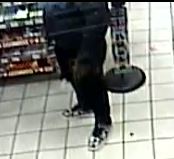 On November 13, 2020, at approximately 3:22 p.m., Champaign Police responded to the 300 block of East Hill Street following the report of an individual believed to be deceased inside of a motor vehicle. Upon arrival, officers confirmed the report and located a 30-year-old male inside of a motor vehicle who had sustained a fatal gunshot wound.
Investigators are actively investigating all leads and seeking any information in relation to this case. Police are asking anyone in the involved neighborhood with surveillance cameras to review the footage for any suspicious persons or vehicles captured in the area either prior to or after the incident.
Champaign County Crime Stoppers
Navigate360 © 2021 All Rights Reserved